The more one digs into canon law, past the codified laws of 1917 and 1983, one finds the Scriptural and Patristic roots which were gathered in the Middle Ages and became the basis for juridical action within the Church. Saint John Paul II, the Legislator who promulgated the 1983 Code of Canon Law, was particularly astute and in his addresses on canonical matters delivered to the Roman Rota (the highest appellate court in the Church). Reading his 1980 address, I saw him quote decretals from Pope Alexander II (d. 1073) and Pope Innocent III (d. 1216), and went searching after the original. This brought me to the Liber Extra  of Pope Gregory IX, the first authoritative collection of papal decrees, which remained in effect from 1234 until 1917.

Flipping through this, I found a brief canon in the section On presumptions. It reads: “Whenever, from two charges, someone denies one of them, he is presumed to affirm the remaining one” (X, Book II, Title XXIII, c. V). Even more interesting then than this bit of jurisprudence is the source cited, which is from a homily of Pope Saint Gregory I (d. 609). The section quoted says, “Are we not right in saying that you are a Samaritan, and you have a demon? Jesus responded: I do not have a demon (Jn. 8:48-49). Two things were charged against him: He denied one, he quietly conceded the other.” 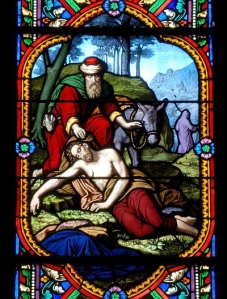 What a strange assertion! Just as strange, is that Lord’s interrogators do not seem to notice, since they later insist only on the denied charge: “Now we know that you are possessed by a demon!” (Jn. 8:52) Despite the logic of the canon, it seemed strange to me that Jesus would be quietly affirming that he is a Samaritan. Literally, we know that he is descended from the house of Judah (Mt. 1) and also that he holds firm the teachings which are denied by Samaritans. But (with the help of Saint Thomas), I found two Church Fathers who explain how Jesus is a Samaritan.

“Two charges had been made against Him: You are a Samaritan, and have a devil. In reply He does not say, I am not a Samaritan: for Samaritan means keeper; and He knew He was a keeper: He could not redeem us, without at the same time preserving us. Lastly, He is the Samaritan, who went up to the wounded, and had compassion on him.” (St. Augustine, Tractates on the Gospel of John 43,1-2)

“Our Lord, even more than Paul, wished to become all things to all men (1 Cor 9:19), that He might gain some and therefore He did not deny being a Samaritan. I have not a devil, is what Jesus alone can say; as He alone can say, The prince of this world comes, and has nothing in Me. None of us are quite free from having a devil. For; even lesser faults come from him.” (Origen, Fragments on John)

Although the current structure of the Church’s law (numbered and codified) hides its historical and scriptural basis, one finds the logic of the Gospel when one goes to its roots and fontes.

One thought on “Jesus the Samaritan and Procedural Canons”