In a class on the jurisprudence of the Roman Rota, our professor was naming all the places to find published sentences and decrees, and also warned us of the danger of taking one sentence alone, as if that was sufficient to represent the constant and common jurisprudence of the Roman Rota. But then I wondered, “How much do we have to read? Surely we can’t read all of it?” I asked her and she recommended reading one sentence a week. If you do that 10 months out of the year, then you will have read 40 sentences within a year. Within two years, I could read 80 sentences, and she said that would be “sufficient” for obtaining some grasp of the common and constant jurisprudence which should guide all tribunals.

Eager to begin this project, I went to the library and found the earliest matrimonial nullity case I could find, and was pleased to discover it was only six pages long! It was easier than I expected, though I still had to look up about 20 words in the course of reading it. I was also curious to see which laws would be referred to, since this case was decided before the promulgation of the first Code of Canon Law in 1917. As an exercise, I will put some observations below.

The case at hand involved a marriage between two Lutherans in Germany who married in 1901. The definitive sentence ruled pro nullitate due to the impediment of vis et metus (of force and fear), after having established by credible testimony that the husband had threatened the woman if she would not marry him and the circumstances that made it impossible for her to refuse.

Lack of form. Before considering the head of nullity that finally decided the case, the judge goes through the legislation pertinent to whether the case could be declared null through the defect of the Tridentine form or the impediment of clandestinity. It seems to me that the judge is giving two names for the same thing, but I am unsure. Since the Tridentine form (what we typically call canonical form) consists primarily in marrying before a parish priest and witnesses, the failure to do this would be to hide the marriage from the Church in some way—making it a clandestine marriage. The use of the word “impediment” is a bit strange, since the grounds of nullity are now often divided into lack of form, defect of consent, and diriment impediments, but it seems the terminology developed over time.

In order to answer whether the (Lutheran) persons in question were bound by canonical form under pain of nullity, it is necessary to look at the dates and places in question. At the Council of Trent (1545–1563), in order to counteract clandestine marriages, introduced the decree Tametsi (cf. Trent, sess. 24, de ref. matr., c. 1). This would require all Christians, under the pain of nullity, to enter marriage before a parish priest and witnesses. This meant that all marriage between two Protestant or mixed marriage (Catholic-Protestant) would be considered null. A unique challenge presented by this decree, however, is that it only took force in parishes where it was duly promulgated. The judge, in this case, was able to determine that Tametsi was not in force in their region (citing an obscure work). So the couple was not bound by canonical form.

In subsequent years, it became much simpler to know whether a marriage required canonical form for validity. In 1908, the decree Ne temere took effect, exempted all Protestants from canonical from and bound all Catholics to it. Well, it bound almost all Catholics. Germany, which received the decree Provida in 1906 was allowed to remain force, which exempted all Protestant and mixed marriages from canonical form, but required it only for Catholics in areas where Tametsi had been promulgated. There are other complications specific to various regions, and I imagine that it was this sort of confusion that gave impetus to the eventual Code of Canon Law, first promulgated in 1917.

Since the marriage in question occurred where it did in 1901, the couple was not bound by canonical form, and so nullity cannot be pursued on this ground. And so the case moves on to the ground of vis et metus. The terminological issue which appeared above, appears here as well: the judge speaks of impedimentum vis et metus, though we now distinguish defects of consent from diriment impediments.

Force and fear. The 1983 Code declares a marriage invalid which is entered into by force or grave fear with certain other qualities (can. 1103). An almost identical canon existed in the 1917 Code (can. 1087). But what laws applied to this marriage contracted 1901 and judged in 1912? The Decretals of Gregory IX, promulgated in 1234. (Indeed, the two pertinent letters contained in the Decretals originated from Pope Alexander III, reigning 1159–1181.) And so, turning through the pages of the Corpus Iuris Canonici to the Liber Extra, Book 4, Title 1, chapters 13 and 14, we find the laws on force and fear in marriage. 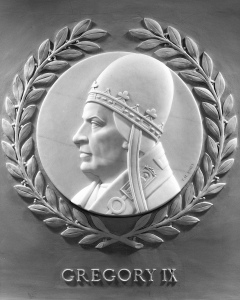 Now the Decretals are sometimes brief and often difficult to read and, furthermore, a judge would also need to take into account the centuries of jurisprudence on how these norms have been understood and applied. So the judge in question wisely cites the manual of Franz Wernz on this matter. Ed Peters suggests that Wernz (1842–1912) may be one of the last persons to read the Decretals in their entirety, and he continues to be cited by Rotal judges to this day. The judge cites Wernz in this context to define more clearly the sort of grave fear which can invalidate a marriage. He cites Wernz again later to help determine the weight to be given to witnesses on this point.

Another author cited in the work is Thomas Sanchez, a moralist who lived 1550–1610 and authored the treatise De matrimonio. Wernz considered his work a classic on marriage and our own judge speaks of “Sanchez, with whom authors generally agree”. He gives five conditions for which fear can be considered grave. Finding these conditions present in the case at hand, and finding no reason to think the marriage was “reconvalidated” through a perfect act of consent at a later time, the judge rules for the nullity of marriage.

One last point on language. The bulk of the sentence is written in Latin. And yet, whenever the acts of the case are cited, it is always in the original language it was taken down in. This is the practice of the Roman Rota even today. Now one would expect this case, having originated in Germany, to give citations in German—but they are all in Italian! It is possible that the editors of these volumes translated those vernacular passages into Italian so that more canonists could read them while still recognizing they are supposed to be vernacular. But I think it is more likely that the tribunal staff in Germany translated the acts into Italian in order to facilitate a more swift decision from the Rota, since they would certainly know Italian. Now the ponens in this case, Franciscus Heiner, ended up being a German, so that may not have been entirely necessary…but it probably didn’t hurt.