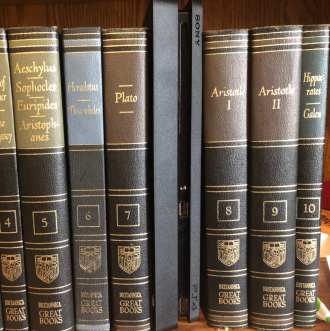 With each day, it looks like this isolation will last longer. Even it is eventually lifted, the schools have been called off for the year, which means no chaplain duties until September. So it’s as if my summer is beginning two months early: the routine and habits I take up now could theoretically carry me through the next 5 months, so it’s important to make a good start. I have continued reading since my last post, but not nearly with the consistency I had hoped. My reading chair is placed far too close to the PlayStation, which offers absolutely no help to completing my syllabus. Here’s what I’ve picked up lately though:

Aristotle, Metaphysics XII. I finished reading that book of the Metaphysics where Aristotle arrives at immaterial being and numbers them. I had begun in my last post to consider the notion of circular motion as present in self-movers. Aristotle shows that there must be something which is moved with an unceasing motion, and that this mobile itself must be eternal, and also there must be something which moves that ever-moving mobile. This mover itself is moved by nothing as it moves the mobile, which is the “first heaven”, the outermost sphere of the universe. One might ask, “Is it possible to move another without being moved oneself?” And he points out that this is clear the case with objects of desire: The glass a of beer moves me to pick it up, not by being moved itself, but through being an object of knowledge and desire. This leads to a whole school of interpretation (perhaps the most common) that says, for Aristotle, the unmoved mover only moves in the mode of a final cause and not in the mode of an agent cause. Thomas will disagree with this interpretation, since God must be both final cause and agent cause, but I can see how people arrive at the conclusion based on this text. Aristotle says, “The final cause, then, produces motion as being loved, but all other things move by being moved” (XII.7), the implication being that things which move but are not moved only do so in the mode of a final cause. Other texts, for example the talk about power in Physics VIII (if I recall correctly), indicate that the first mover does indeed move in the mode of an agent cause without being moved. 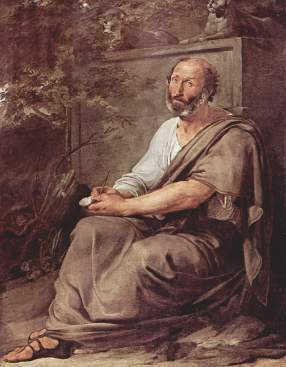 Whereas St. Thomas, after showing the existence of an Unmoved Mover, will go on to consider this being as simple, then perfect, then good, then infinite, then etc., before finally arriving at the knowledge and beatitude of God, Aristotle goes to these qualities right away. “On such a principle, then, depend the heavens and the world of nature. And it is a life such as the best which we enjoy, and enjoy but for a short time, since its actuality is also pleasure.” He is clear that it is life, and that it is delightful, and that it is better than ours because it possesses in an eternal way, what we can only possess in a temporary way. He goes on, “Thinking in itself deals with that which is best in itself, and that which is thinking in the fullest sense with that which is best in the fullest sense.” He observes that it is delightful to a man to be awake, to perceive and to think, and especially to perceive the best things and to think the best things. So for this being, that always thinks about the very best of thinks, its life is the best imaginable. And indeed, it itself is the very object of thought upon which it thinks. This is interesting, since Aristotle is subtly pointing out our share in beatitude: If this One who is thinking lives the best life because it is thinking about the best object of thought (itself), then we, to the extent that we can lift our minds to this object, are living a life that resembles in some way the greatest of all beings.

“If, then, God is always in that good state in which we sometimes are, this compels our wonder; and if in a better this compels it yet more. And God is in a better state. And life also belongs to God; for the actuality of thought is life, and God is that actuality; and God’s self-dependent actuality is life most good and eternal.” It’s hard to imagine the delight which Aristotle would have displayed while teaching this to his hearers, the certitude with which he can say something true about God and his life.

The next section of the book gets more difficult: he talks about other beings that move without being moved. And he says there are about 47 or 55 of them, depending on how good your astronomy is. This is where he starts to lose me, but there is some sense in his method. Between the earth and the outermost layer of heaven, there are 7 visible bodies in the sky which have movements which vary from the rest of the stars: the Moon, Mercury, Venus, Mars, the Sun, Jupiter, Saturn. (If I hadn’t studied Ptolemy, I’d be lost at this point, but I can keep going.) Whereas one motion and one mover is sufficient to account for the “fixed stars”, these other heavenly bodies require other motions to explain what they are doing. [Here I attempted to go through the calculations of Eudoxus and Callippus to figure out where all the motions are coming from…nope, you’ll just have to take his word for it:] And so they are 47 or 55 depending on whose calculations are correct.

Here I am disappointed to say that I cannot accept his conclusions, since I do accept that the planets are made of the same kind of matter we have down here, that their circular motion is not natural but follows the same laws as terrestrial bodies, and that they are not truly eternal. I’m a little disappointed: Wouldn’t it be cool to deduce the existence of immaterial beings from looking at the planets? Aristotle even calls astronomy “that one of the mathematical sciences which is most akin to philosophy; for this science speculates about substance which is perceptible but eternal.” Certainly older than ancient, and indicative of the origin of things, but not eternal.

The last chapter of book XII considers the order of the universe, bringing things back to the notion of Wisdom, the consider of which stands at beginning of the entire Metaphysics. I’ll hopefully write about that in another post… 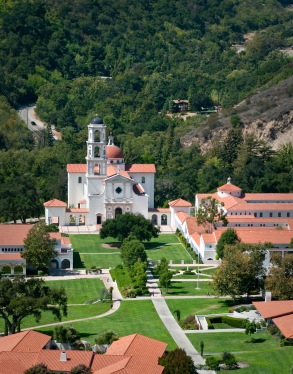 Marcus Berquist, various essays. Marcus Berquist was one of the founders of Thomas Aquinas College, a small college in California that truly takes Aristotle and St. Thomas Aquinas as masters of the intellectual life. I must have received this volume of collected writings last year, since it was published in 2019. What a delight to read! I met the man on only a couple occasions, as he passed away during my freshman year. I expect to read more, but I read one lengthier paper on the proof of a First Mover based on the premise that every mobile is divisible, based on Physics VII. He carefully presents the proof, the significance of it, answers objections, and humbly explains gaps in the arguments of Aristotle and Thomas. I was also able to read some of the shorter pieces: an interview he gave on Catholic doctrine concerning angels, on the different types of wine, and an overview of the definitions of motion presented by other thinkers and philosophers. I will pick up this volume again soon.

Dante, Paradiso. In my eagerness to learn about the angels, I will consult even poets on the matter! I last read through the entire Divine Comedy almost 10 years ago. I have picked up each volume here and there to see certain passages, but I wanted to see celestial being, to hear it described. And the first line picks up where Aristotle leaves off, “The glory of him who moves all things…” How much more glorious this is than to be nel mezzo del cammino! And Aristotle was indeed a great preparation for this, since it takes place among the heavenly bodies. Though Dante probably held many views in common with Aristotle about the heavenly bodies and their motion, he allows that this his presentation by planet is more for our benefit than because the saints really are divided across the planets.

One has to greet your native powers so:
for from the senses man’s mind apprehends
all it makes fit for intellect to know.

And so Beatrice provides the reason for this appearance even though, in truth,

all lend beauty to the inmost ring
and live sweet life, as each one, more or less,
enjoys the breath of the eternal spring. 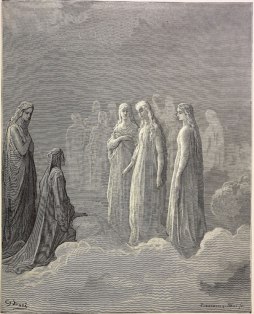 So whereas the Timaeus of Plato seems literally to express the view of that philosopher, that human souls are united to celestial bodies, the vision of Dante is meant to teach us in a sensible mode about spiritual things, as when the Scriptures describe angels with human faces, though this is certainly not the case (for they are without bodies). I only read up through Dante’s visit to the Moon, where he sees souls who did not persist in their vows, and yet arrived at beatitude. They talk about how their wills now are perfectly in accord with the Holy Spirit, and how they do not envy those who are in the higher spheres. Going back to the topic of angels, there is a beautiful little exchange in Canto II, where Beatrice corrects Dante for thinking that all of the stars are alike in nature and are just more or less spread out. She argues instead that each is diverse in nature, and this diversity of nature accounts for the differences we see in their quality and quantity.

How unfortunate that so beautiful an account is rendered null by modern science! I do not blame Copernicus for placing the Sun at the center of his model—any ancient astronomer might have noticed how Mercury and Venus are encircling that body. No, I want to blame Galileo and Tycho for observing a new star in the heavens, and Newton for showing that the heavens are bound to the same laws as earth! Of course, these are magnificent and painstakingly established discoveries, but I have not yet read the poet or philosopher that makes these truths a source of wonder, in the way that Aristotle and Dante did with undying heavenly bodies of old.

That’s enough for now. If anyone knows a wonderful work of literature that somehow provokes wonder from the actual truth about the heavens, I would appreciate that.